BC Cars Motorsport review of 2016 BRSCC so far…

The 2016 season sees the boys at BC CARS MOTORSPORT having their busiest MX5 Racing season to date. The current BRSCC MX5 Champion and owner of BC CARS MOTORSPORT Brian Chandler and the team would be running six cars in this championship. Brian, who also won the MX5 cup series in the 750 Motor club in 2014 would be running four cars in their championship along with one rental car to go in and out of both championships whenever needed and to run on a variety of track days throughout the season meant the boys wouldn’t be at home much in 2016.

After winning both championships Brian decided to sell his Mx5 and concentrate on racing some other cars in other championships. Mainly a BMW M3 in an all new M3 Cup and a Porsche 911 in the GT Cup.

“It was quite an emotional end of last season, winning the BRSCC MX5 Championship and knowing I was going to sell my car which I had built from scratch and had been racing for four seasons. But at least my car is staying in our care. One of my team mates has bought her so she is just going to have a colour change. I must stop referring to her as my car now though” chuckled Brian.

Winter testing went well for all the guys under the BC Cars awning and also welcomed two new cars and drivers to the team.

Our driver of the meeting went to our new driver Paul Maguire. Finishing both races high in the A races and the fastest driver in the awning, closely followed by our seasoned racer Simon Woods, also finishing high in the A race. The rest of the awning certainly did a good job of blowing out the winter cobwebs and improved on last season’s results. With a bit of baptism of fire for new guy Clive Chisnel improving every lap, but unfortunately finding a tyre wall towards the end of race two. That’s racing.

ROUND 2 ANGLESEY 7th/8th May

Round 2 took us to a sunny but windy Wales… Paul Maguire and Clive Chisnel sat this round out so all eyes were on Simon to be fastest under the awning. He didn’t disappoint with solid top A race results. Patrick also had his best performance to date and was at the sharp end of the B race. Matt Pickford was starting to get to grips with his new car and was finding pace. But a BIG crash in 1 of the early races would end his weekend early and give the team a huge rebuild job that would see the car in pieces for a couple of weeks. Matt walked free from the wreckage without a scratch. Testament to the little, strong MX5’s that are well over 20 years old.

Round 3 took us overseas to Zolder in Belgium. Not a full awning as not all budgets can make the trip. Our team would consist of Paul Maguire, Simon Woods, and Matt Pickford. Nobody had been around the Zolder track so it was a good leveller. Fastest awning man went to Paul again. He definitely has got to grips with the MX5s. Again he was shadowed all the way by Simon Woods, I think we can see a Lewis Hamilton/Nico Rosberg team mate fight developing here.

Matt Pickford was on damage limitation. Making sure his completely rebuilt (the paint was still wet in places) car was feeling ok, and also getting confidence back again.

This was our busiest race day to date. The awning was full along with the rental car going to new racer James Love – who was looking for his first ever race experience.

Simon and Paul would continue their rivalry finishing high in the A races. Brian’s driver of the awning had to go to Matt Pickford. His first ever race win in the B race. “There is soo much pressure leading a race. Matt drove superbly. Hopefully this will boost his confidence and the results will start flying in” Says Brian.

Another busy one for the BC CARS MOTORSPORT boys. A full awning but unfortunately a few non finishes. Again it was Simon and Paul fighting for quickest driver. Very changeable weather favoured the seasoned driver of Simon Woods as Paul Maguire would see his first DNF and trip into the treacherous gravel trap at Paddock Hill “We all make mistakes, we are pushing the cars to the edge of grip, especially in these conditions. It’s a lesson we all have to learn as race drivers. I’ve been through that gravel trap a few times myself. I can laugh about it now. Paul is understandably disappointed” remarks Brian.

Also to DNF was Matt. “There was a loud bang as I drove away from the lights” With the car recovered to the pits it was found the rear differential had failed. “These cars are strong and very bullet proof, sometimes I think we take for granted the stress racing puts on them. Thats racing. Although I hate to see them failing” says a disappointed Brian.

Championship table so far sees Simon Woods in 7th place, Paul Maguire in 19th, Matt Pickford in 33rd, Patrick Collins in 37th and Clive Chisnel in 45th out of 58 competitors. Just three rounds left to push our drivers up the table. Next up is Donnington at the end of August, followed by Rockingham and then finally finishing at Silverstone in October. 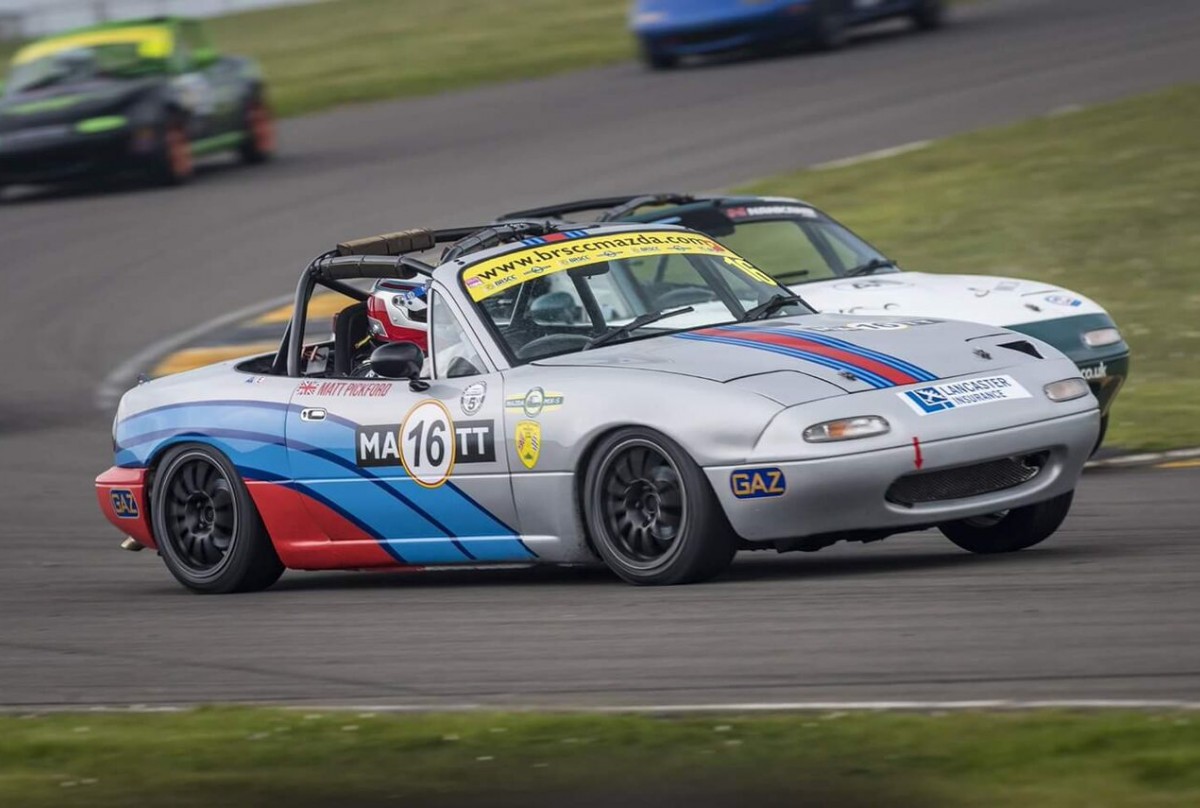 rach_hw2019-08-23T15:56:52+01:00
This site uses cookies to help things run smoothly. It also stores anonymised information on how you use it in order to improve your experience. These cookies are safe and secure and will never contain any sensitive information. Settings Accept & Close
Go to Top